The War – Deception, Repression, and the Coup

In 1959, the Vietnam War initiated. The Việt Cộng also known as the National Liberation Front (NLF) was formed. It was the military wing of the South Vietnamese communist party. The Việt Cộng largely fought a guerrilla warfare against anti-communist forces in the south. The guerrilla warfare was an unconventional warfare and combat with which a small group of combatants use ambushes, raids, etc. to combat a larger and less mobile formal army. 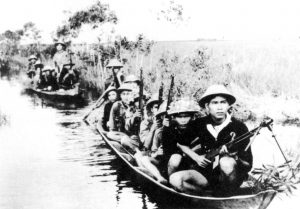 The North Vietnamese Army engaged in more conventional war. Because of smaller forces, minimal man power and supplies, North Vietnamese relied on the familiarity of the land, the guerrilla warfare and the peasants’ assistance for the war. The South Vietnamese forces relied on air and fire power supplied by the US and other anti-communist countries.

As Diệm’s paranoia and repression progressively angered large segments of the population of South Vietnam, many believed that the origin of the anti-government violence were homegrown. From the increasing unpopularity of the Diệm regime, Hanoi authorized the creation of the National Liberation Front as a front group for the Việt Cộng in the south on December 12, 1960.

The quality of the South Vietnamese military was poor. Bad leadership, corruption, and political interference were at a core of the crisis which gave the advantage to the Vietnamese communists.

President John F. Kennedy was the elected president in 1960. Kennedy administrations committed to the Cold War foreign policy inherited from Truman and Eisenhower administrations. The US continued its support to South Vietnam. By 1963, there were 16,000 American military personnel in South Vietnam.

The South Vietnamese were discontent with Diệm’s policies. Diệm refused to acknowledge responsibility for the deaths of many Buddhists who were protesting against the ban on the Buddhist flag on Vesak, Buddha’s birthday.

During the summer of 1963, the Southern Vietnamese generals planned to remove Diệm and Diệm’s younger brother Ngô Ðình Nhu. Nhu controlled the secret police and was seen as the man behind the Buddhist repression. The U.S. was in favored of a regime change. A coup within the South Vietnamese government was formed. President Diệm was overthrown and executed, along with his brother, on November 2, 1963

In 1963, Lyndon B. Johnson took over the presidency after the death of Kennedy. Meanwhile, Nguyễn Văn Thiệu came in power as President and Nguyễn Cao Kỳ as Vice President in South Vietnam.