Ending of War – Fall of Saigon

Gerald Ford took over as U.S. president on August 9, 1974 after President Nixon resigned due to the Watergate scandal. The midterm election brought in a new Congress dominated by Democrats. The U.S. Congress cut financial aid to South Vietnam. Congress immediately voted in restrictions on funding and military activities to be phased in through 1975 and to culminate in a total cutoff of funding in 1976.

Vietnam President Thiệu resigned on April 21, 1975. Thiệu declared that the United States had betrayed South Vietnam and did not kept its promise to help fight for freedom. He left for Taiwan on April 25, 1975. Thiệu left the control of the government in the hands of General Dương Văn Minh. Saigon surrendered to the North on April 30, 1975. Laos and Cambodia were overrun by Communist troops that same spring. 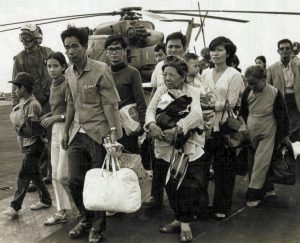 On April 30, 1975, South and North Vietnam united. It became known as the Liberation Day or Reunification Day. For most former South Vietnamese expatriates in the United States, the week of April 30 is known as “Black April” and remembering it as the “Fall of Saigon.”

After the fall of Saigon, many South Vietnamese fled to the United States in one of the largest war refugee migrations in history. Over a period from 1975 to 1991, it was estimated to be over one million Vietnamese fled for asylum and resettlement.

My grandparents left for America among the first waves of migration in 1975. I was 7 years old and my siblings were at the ages from 3 to 10. My family stayed behind. The news of leaving for America was sudden, my parents were not prepared to pick everything up and leave. We stayed in Vietnam hoping for the best.