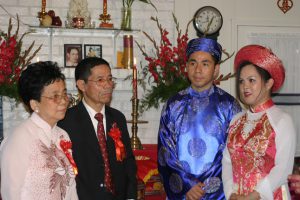 Traditionally at a Vietnamese wedding, the groom pays for everything. The man bearing the most gifts will win the bride. The gifts could be money, land, live stock, and/or gold. During earlier days, live stock and gold were common elements used as offerings to the bride’s family. Now, Vietnamese weddings frequently involve roasted pigs. The roasted pig symbolizes the traditional offering from the groom’s family to the bride’s family. My husband often mentions the topic of roasted pig to our friends. He boasts “Yep, I bought my wife with a roasted pig.”

Arranged marriages and polygamy were common in Vietnam. My grandparents were married when they were only thirteen and eleven. Sometimes marriages were arranged without the children’s consent. They were promised to each other even before they were born. The children had to honor and obey.

Polygamy was also accepted during my grandparents’ time. This was a common practice in Vietnam. My grandmother was a superstitious woman. She found my grandfather a second wife in order to conceive a son. This action was suggested by a palm reader. Boys were held in the highest respect. My grandfather’s second wife conceived a boy. At a similar time, my grandmother also conceived a boy. The result only validated her superstition even more.

Even though arranged marriages and polygamy are no longer in practice at this current time, it is not impossible that there are still families in small villages or tribal villages who still uphold the ancient tradition.

Vietnamese celebrate the New Year called Tết and the anniversary of the dead called Giỗ. I will discuss these two celebrations because I am most familiar with them. Both of these special days follow the Chinese Lunar Calendar. The dates changes every year. 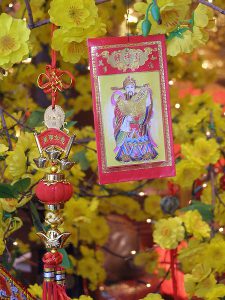 Tết is celebrated for three consecutive days. The start of the lunar year is based on the cycles of the moon. The beginning of the year can fall anywhere between late January and the middle of February because of this cyclical dating. Birthdays are celebrated during Tết and everyone automatically becomes one year older. The whole country celebrates this festival heartily.

Vietnamese also celebrate Giỗ. It is a date anniversary of a dead ancestor and/or a dead family member. Vietnamese believe in life after death. During Giỗ festivities, different foods are placed on an altar. The head member of the family offers food and paper money to the deceased. Vietnamese believe the dead still enjoy food and use money in the after life. The paper money is burned so the deceased can have access to it. Everyone enjoys the food after the ceremony. 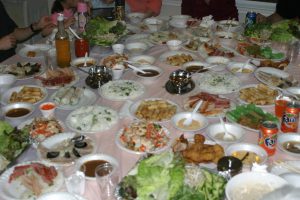 We had many family gatherings and food feast in honor of the ancestors.  It was our way of thanking our ancestors without them we would not be here today. Giỗ is a celebration for the dead while Tết is a celebration for life. Food was a common bond for our families.  Both celebrations unite families and create festive occasions.