The expression of love is indirectly given. Love is understood and kept hidden until sometimes at their death bed. Kisses and hugs between adults are awkward. Love is usually displayed via food. A mother gives love through a constant feeding frenzy. She receives love through compliments on her food.

Vietnamese cuisine varies from the North to the South. There are over several hundred different traditional dishes. Rice is the primary common Vietnamese food staple regardless of the different regions. It is cheap and easily grown. We have rice as a filler in everything such as entree, appetizers and desserts. 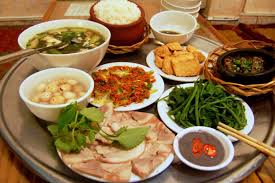 My every day meal is usually consists of soup, a vegetable stir-fry, and/or a brine meat or fish dish served with white rice. There is usually no appetizers or desserts. Although, the men who are the head of the household do have their own version of appetizers served with beer and other alcoholic beverages before a meal. Those appetizers are generally gizzards, liver, hearts, other innards of a chicken or pig, and sometimes exotic meat such as dogs, eels, frogs, etc. 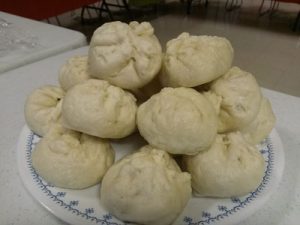 It is common to snack in between meals with fruits and other Vietnamese snacks such as bánh bao, bánh bò, bánh cam, and other street foods (junk food). I almost would consider snack time a meal all on its own. Snack time is my favorite meal of the day.

Vietnam is famous for its phở beef noodle soup and plentiful of herbs. Phở is so popular in Vietnam that it is so much easier and cheaper to buy a bowl of phở when we go out then to make it at home. There is a phở vendor in almost every corner of any market.

Fish sauce is Vietnamese pride and joy signature condiment. We use fish sauce in almost all of our cooking except for desserts. It is the flavor that stands out among all the Asian cuisines.

There are plethora of seafood since the eastern side of Vietnam borders the sea. The most common meats are pork and then chicken. Fat and pork skins similar to cracklins are very common for Vietnamese with high status.

During the French colonialism in Vietnam, bread and desserts were introduced. The French beef stew gave birth to Phở while the baguettes inaugurate a new form of sandwiches called bánh mì nguội, a bridge between the western and eastern culture. The French restaurants in Vietnam exposed Vietnamese to appetizers and desserts. Desserts then became popular among the people. Many French bakeries began to populate in large cities such as Saigon and Hanoi.

Most older Vietnamese like myself are lactose intolerant. We grew up with powdered milk and condensed milk instead of fresh milk, cheese, and butter. The rugged terrain of Vietnam does not yield flat green pasture to raise cows. Mostly buffaloes were raised as tractors to help farm the land. Therefore, beef was the most expensive form of meat and dairy such as fresh milk and cheese were more affordable by the wealthy Vietnamese and foreigners.

The highlight of everyday life is going to the Vietnamese open food market. Exotic fresh tropical fruits are available to everyone. Fresh food products are served everyday. Yum!

Refrigerators and microwaves are not as affordable for everyone. Therefore, most foods are sold and eaten by the end of the day. Side street vendors are a dime a dozen. The vendors are open from dawn to dusk. Typically in an open market, everything can be bargained. Bargains are every where even if one does not know how to wheel and deal.

Similar to many small countries, Vietnam is going through its own growing pain. When I visited during the summer of 2016, I learned that Vietnamese are also experiencing chemicals and hormones injections in the farming industry for agricultural and livestock. Many Vietnamese are now becoming aware and are learning to balance the food so that it can be safe for consumption.