In this chapter, I shall be sharing my brothers’ perspectives during our travel to America. Both brothers were very young so they did not remember many things. I interviewed both. They both shared what they remembered to the best of their abilities. 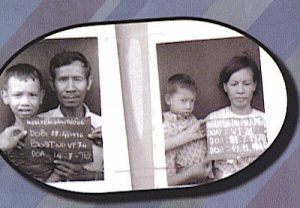 Chí Cương was the firstborn boy of our family. Excitedly, my dad was going to name the firstborn boy Mạnh Cường. It was Friday, November 13th and ten minutes before noon, my mom barely arrived at the hospital. Chí Cương stormed right out not waiting for the doctor or the nurse. My dad named the new born boy “Chí Cương” instead of Mạnh Cường. He had a hunch that Chí Cương was going to be a strong will boy.

In Vietnam, I remembered whenever I visited my family there were always Mạnh Cường and Chí Cương. Both brothers were always together. They were buddies growing up. Mạnh Cường followed Chí Cương every where. They often got in trouble for their little mischievous adventures together.

After we moved to Texas, Mạnh Cường used the name Mạnh to differentiate between Chí Cương and himself among their friends. The names were pronounced slightly and subtly different in Vietnamese because of the accents. However, to others, both names sounded the same. Chí Cương also used Chí as his name. I shall refer the names Chí and Mạnh for the rest of the articles.

Remember during the 80’s there was a plush toy called “the monchichi”? There was a television show along with the catchy song in a commercial. My brothers were teased at school as “The Monchichis”. The tease didn’t bother them. They actually went along with it and announced themselves as “The Manh Chi Chi.”