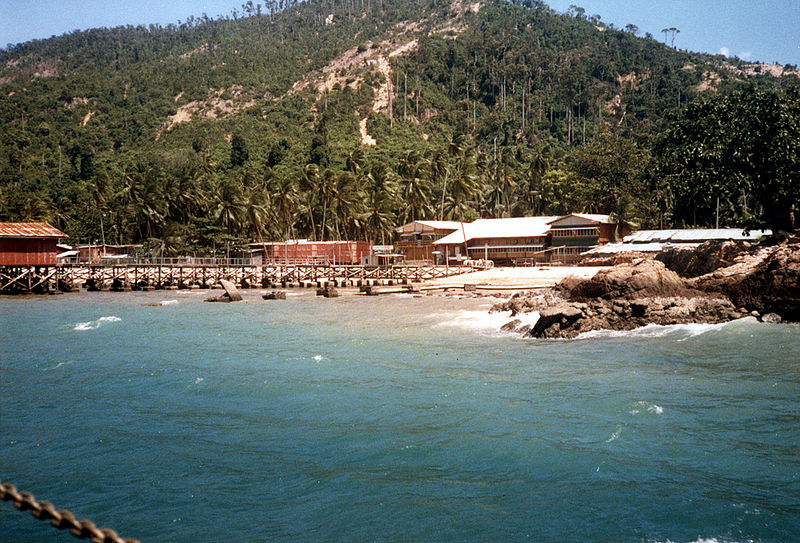 Being the smallest, Mạnh got picked on often by the older siblings. With a large family, there was a pecking order of being picked on. However, there were perks in being the youngest. The biggest perks were protection by my mom and receiving the first dip on new food.

On the island, my dad made the girls little pots and pans out of tin cans. Hạnh, my older sister, and I attempted to make our first cookies. Mạnh got the first dip on sampling our first hard cookie. Mạnh made a small grunt expression. I don’t think he will want to sample our cooking any time in the near future. We were lucky he didn’t break any tooth.

One afternoon, Hạnh and I were being followed. Chí discovered that Hạnh and I had been wondering off on some kind of adventures the past week. Mạnh didn’t care to come along. Hanh and I yelled at Chí and forbid for him to come. Chí cried and told our mom that Hạnh and I wouldn’t let him explore with us. Finally, we agreed to take him along. Chí was so proud and excited.

Hạnh and I developed our own little language together. We spoke Vietnamese backward and pretended that it was another language. We practiced it so often that it came out naturally as if it was another language. Some people thought we were speaking some sort of Chinese dialect. Chí however knew we were speaking Vietnamese backward but he couldn’t keep up fast enough to decode it. On our walk, we teased him in our little language and he didn’t even know. Hee hee hee.

We got to the beach and the sun was burning hot that day. It was beating down on our heads unrelentingly. Perhaps, fifteen to twenty minutes in to our hike, Chí threw up. He was not feeling well from the heat. His body was dehydrated from lack of water. Hanh & I agreed to turn around. This time, Chí can’t hike on any further. He was limped like a wet rag. Being the oldest of the crew, Hanh carried him on her back. Heading back to the campsite, Hạnh ranted and raved under her breath. Carrying a heavy little boy on her back who she didn’t want to come along in the first place was not her idea of fun. That was the last island adventure that Chí followed. He didn’t care to follow us again.

Chí and Mạnh did not make any close friends while we were on the island. Chí remembered almost gotten into a fight with another kid. Hạnh and I happened to wonder by and stopped the fight. We threatened to tell our parents. Luckily, Chí listened and never again fought with anyone else.

There was a time when Chí tried out smoking a cigarette. He somehow stumbled across a half lit left over cigarette on the ground. It was cool watching other people smoked. He picked it up and took a big deep breath inhaling in the cigarette. After inhaling the big breath of smoke, he immediately choked and gagged on the smoke. “That tasted horrible,” he mumbled, “why do people smoke it anyway?”

Chí did not remember being scared or nervous. He thought everything was fun, new, and exciting. On occasion, our dad made a boat for Chí and Mạnh out of a soda can. That boat entertained the boys for hours.

The saddest time Chí remembered was when we had to part with our dad for a temporary time. He was not sure why and didn’t questioned it. He was not curious of why or how. He just followed our group and moved along as told.

His only regret while we were on the island was that the island became dirty and trashy. He remembered the beach being pristine and beautiful when we first arrived. When we left, we left the island crowded and in a dirty condition.

Final Thoughts About the Brothers

Both Chí Cương and Mạnh Cường lived up to their names. Chí was strong will and independent and Mạnh was strong and vigorous.

After I moved away to college, I had the privilege to observe Chí from a far. He bloomed into manhood when he joined the National Coast Guard. He endured a painful intimacy of relationship and became a resilience character exuding loyalty, love, and sturdy ground for his new romantic relationship.

Chí Cương is now a successful mechanic for Union Pacific Rail Road in Houston. He is married to Kim Phụng Lao. They have no children yet. When they do, I know their children will be cuties.

Mạnh Cường is married to Nhi Thuý Trần. Together they have two talented and attractive children, a boy and a girl. Mạnh worked hard and diligently in achieving his dream of becoming a doctor. His hard work and perseverance paid off. Currently, Mạnh is an air force officer and a doctor in pathology.

Even though he has a family of his own and become a successful physician, Mạnh is forever branded as my youngest brother.
I am very proud both Chí Cương and Mạnh Cường and their achievements.