Mai Hương meant beautiful fragrance of a yellow flowering plant called ochna or mickey-mouse plant. This is a special flower that symbolized the Lunar New Year and the beginning of spring. The flowers bloom during the Lunar New Year between the end of January to mid February. 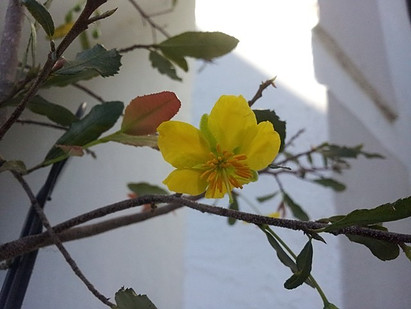 Initially Hương was a name of one of my mom’s cousins. My grandfather requested that my parents to rename their firstborn child to another name. In Vietnamese tradition, it was considered as an insult to the adult if you name your child after someone you know let alone someone in your family. My dad did not know about the cousin until after he named his firstborn daughter Hương. In order to show respect to the aunt, he modified Hương to Hường. Hường meant a rose.

My mom mentioned that my dad kept the name “Mai Hương” in official documents and asked everyone in our family to call my sister “Hường”. That seemed to please my grandfather.

You probably say wohhh, the name looks the same, spells the same, and probably sounds the same. There is an extra accent mark in the new name that made a subtle different sound to the name. One accent can alter the full meaning of the word as well as its pronunciation. It is hard to differentiate unless you understand Vietnamese and listen for the subtle up and down tone of the word. Vietnamese is a melodic and mono syllabic language. It is almost like you are singing a song when you speak Vietnamese because of the tones of ups and downs. My husband, Chris, would occasional teases, “Vietnamese sounds like animal noise.”

I guess the extra accent doesn’t matter now since we are living in America. However, the older generation of aunts and uncles still calls my sister the name “Hường”.