What is a betel nut? It is a combination of betel leaves, areca nuts, and lime offered during Vietnamese 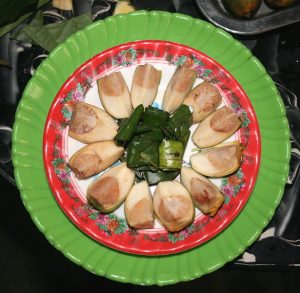 traditional wedding ceremonies. It is known as “Trầu Cau” in Vietnamese. Trầu is the betel leaves with a heart shape. It has a stingy and spicy flavor. Cau is the areca nuts which has a bitterly pungent taste. It is a fruit that resembles a smaller version of coconuts or large nuts. The lime is vôi (not lime / lemon). According to google translation, “vôi is a white caustic alkaline substance consisting of calcium oxide, obtained by heating limestone.” It is white with a consistency of thick wet flour.

When they are being chewed together, they produced red color to the lips which is considered very attractive in Northern Vietnam. Also, the three items combined reduce the pungent and stingy taste that occur when they are chewed separately. 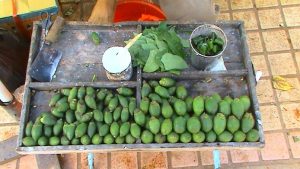 The origin of betel leaves and areca (Sự Tích Trầu Cau) was based off a folklore which was passed on from one generation to the next. It was a love story between the twin brothers and a woman.

Once upon a time there lived two brothers who were twins. Their parents died when they were young. They were cared by an old teacher. He raised them as his own children. As they grew older living under the same roof, they both fell in love with the teacher’s daughter. She loved them both.

One of Vietnamese customary tradition was the elder marry first. The teacher granted the older brother his daughter’s hand in marriage. The younger brother pushed away his emotion for the daughter and accepted her as his sister-in-law.

The younger brother left home and walked for miles until he reached a river. He fell and died out of exhaustion and a broken heart. At the location where he died, a large limestone appeared.

The wife waited and waited but no one returned. She then started walking the same path. She came upon the side of the river. The wife thought she heard her husband voice whispering in the wind. She sat down and rested against the limestone and received shade from the tall areca plant.

The wife died of exhaustion and sadness. From her same spot, a vine of betel grew and intertwined itself around the areca plant.

From then on, the love between the two brothers and the wife symbolized unity and loyalty. The product of their love were the betel leaves (trầu), areca nuts (cau), and the powder from the limestone (vôi). They are a special mix that is generally used as gifts for the bride and groom during their wedding ceremony wishing for long lasting marriage and unity. The three items became popular as betel nut tradition (trầu cau và vôi).

At my own wedding which seemed like yesterday but yet almost 25 years ago, my husband had to purchase the three items to complete our Vietnamese traditional wedding ceremony. My mom proudly packaged them as gifts for friends and families as an announcement that my daughter had entered an engagement agreement.

The Use of Betel Nuts

Betel nut is used similarly to the use of chewing tobacco. The combination of the betel leaves, areca nut, and lime mixture placed inside the mouth between the cheek and the jaw and chew it once in a while. The mixture can remain in the mouth for an hour or longer. The saliva produced by the mouth can be swallow but do not swallow the the betel nut. The stimulant effect can be felt immediately when chew and it lasts for three to four hours. It is also known for an appetite suppressing effect.

During the winter months in northern Vietnam, it was bitter cold and especially there was no central heat system in every households. The Vietnamese found chewing betel nut stimulated the heat within themselves to keep warm. Traditionally as well as in wedding ceremony, chewing betel nuts was an important and popular social activity in Northern Vietnam. They were used as a conversation starter similar to a pipe and/or green tea. 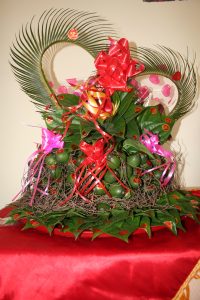 The betel nut chewing went back as far as three thousand years ago. Preparing the traditional betel is a form of art all on its own. As I learned through my research from the article discover-nhatrang.com, “the way of preparing the betel leaves reflect the social class, education level, temperament as well as the sense of aesthetics. It was judged through the way the fold of the betel leaves and husk, and split the areca nuts along with smaller details tray with full fresh makings.”

There were many forms and ways of folding the leaves. Here are a few examples I extracted from the discover-nhatrang.com article: “The Phoenix-Winged Form is usually used for weddings while “Scimitar Form” (Trầu têm Mũi Mác) is used when the wives see off their husbands to the battlefield, along with the “Sword Form” (Tàu têm Cánh Kiếm) always cherish the hope of victory.”

Even though trầu cau social chewing tradition is slowly fading during my generation, it is still a symbolism of unity and exists during Vietnamese traditional wedding ceremony today.