The Vietnamese are rather small people in stature and round in facial features. On average, Vietnamese range from 4 feet to 5 feet 6 inches tall. We have distinctive almond shaped eyes with doubled eyelids,  wide face, dark skin and wide nose with low nose bridge. We are not well known as football players or sumo wrestlers. However, Vietnamese are agile, quick, and flexible. We would make great gymnasts and/or perhaps soccer players.

Vietnamese people are simple and hardy in nature. We are farmers at heart. Although my immediate family are city folks, as we grow older we have a tendency to lean toward tending to our garden. I love to watch the fruit of my labor grow into edible fruits or vegetable. 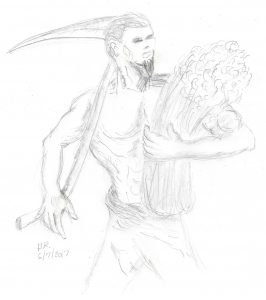 If a superhero exists in Vietnam, I envision a Vietnamese super hero as a man with a goatee holding a sickle in hand. He has broad shoulders with tone sinewy arms, legs, and abdomen.

Because of war migration, Vietnamese people became adaptable and versatile to the environment and the surroundings. Even though we have a distinctive flavor to Vietnamese food, some of our Vietnamese cuisines acquired other culture and flavor through out the ages.

The Vietnamese language is tonal and monosyllabic. The meaning of each word depends on the tone and every word is one syllable. Vietnamese is the official language in Vietnam. Similar to Vietnamese food, the language

has been influenced by Chinese and French. Between 15th and 19th century and during my grandfather’s time, Vietnamese was written with Chinese characters called Chữ Nôm among the Vietnamese scholars and elite. After 1920 with the French influence, the Latin-based Vietnamese alphabet substituted Chữ Nôm as a preferred way to communicate and record Vietnamese. Chữ Nôm characters still exists today in historical and ceremonial symbols for good luck.