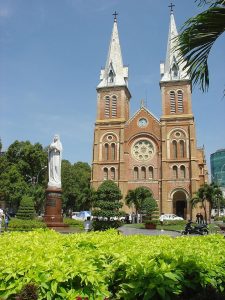 For the first ten years of my life growing up in Vietnam, I was most familiar with Buddhism (Đạo Phật). During those times, there was this distant bell ringing in my ears every Sunday morning down several blocks.  I always wondered what that was. One December morning, I remembered following the bell chime and came upon what I learned later was a church. I sneaked a peek through a window of where the bell chime originated. There was beautiful singing and music ringing through out the corridor. That was when I learned that there was another religion other than Buddhism call Christianity (Đạo Chúa). 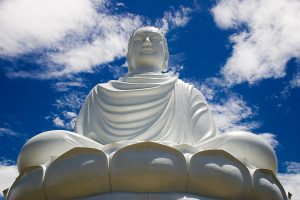 According to the Pew Research Center, in 2010 45.3% practice folk religions, 16.4% practice Buddhism, 8.2% practice Christianity (mostly Catholics), and the remaining 30% are not affiliated to any religion.  The folk religion is historically structured by Confucianism and Taoism from China. Traditional folk religions worship Gods, Goddesses, and Ancestors.

The most common practice among the Vietnamese regardless of religious affiliation is the celebration of the ancestors. In generally, many Vietnamese households or businesses have an altar where we honored our ancestors. We also celebrate the day of our ancestor’s death. This celebration is called “Giỗ” in memory of our loved ones. My father passed away ten years ago. Every year since then, I visited my mother and my siblings to celebrate his death anniversary. His death date changes every year because we use the date according to the moon calendar. 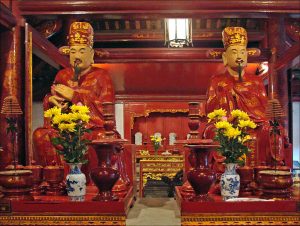 My family follows the Buddhism tradition. Even though I do not attend the Buddhist temple often, I follow the philosophy and belief in my every day life. I find the honor of our ancestor tradition near and dear to my heart. Now that I live in America it takes an effort to remember and honor the tradition. I hope to carry on the tradition until I die and pass it on to my children. However being so far away from our homeland, the tradition may slowly fade away as time passes from one generation to the next. I guess it is as expected. Every day life moves forward for all but tradition and culture will always live on in our hearts and souls.